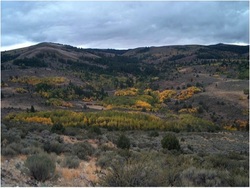 Soils in the critical zone sustain life --providing benefits to society such as a medium for plant growth, water purification and climate regulation. Indeed, soils store three times the amount of carbon than the atmosphere, and may be a source or sink to the atmosphere with changing climate and land management practices, yet major gaps exist in our understanding of the processes controlling soil carbon storage. Scientists from Idaho State University (Lohse, Lead-PI), USDA Agricultural Research Service and Boise State University established the Reynolds Creek Experimental Watershed and Critical Zone Observatory (RCEW- CZO) in Southwest Idaho with goal of being the leader in critical zone carbon science and improving prediction of soil carbon and being a magnet for global climate and biogeochemistry modeling. This CZO program is terminating in November 2021, but numerous new projects associated with the new NSF CZCN as well as other NSF projects have been funded at the RCEW-CZO (see below)

For a virtual tour go to https://www.reynoldscreektour.com/, or explore with an interactive map using our ArcGIS Online WebApp.
See Reynolds Creek Critical Zone Product Collection for a current list of publications from the RC CZO.

Intermittent and ephemeral streams make up a large proportion of surface waters in the Western United States (89%), yet little is known about their structure and function and how they will respond to changes in climate.

To fill this gap, we evaluated the structure and function of ephemeral washes in Arizona with funding from DOD SERDP program. We established sites in natural ephemeral washes at 13 locations distributed across a climate gradient in Arizona and are currently establishing baseline data on the hydrology, biogeochemistry, and riparian and invertebrate ecology. Findings from this research showed decomposition varyied with % stream water presence (Lohse et al. 2020, Gallo et al. 2020; Lohse et al. 2020a, b, c datasets).

A new EPSCoR Aquatic Intermittency effects on Microbiomes in Streams (AIMS) project lead by Amy Burgin at University of Kansas with Sarah Godsey as Idaho State University lead is investigating the linkages between hydrology, biogeochemistry, and the microbial communities associated with intermittent streams across seven institutions and 5 EPSCoR states.

The American West is perceived as a vast, open landscape, yet this frontier has been undergoing unprecedented rates of urban and regional growth. Indeed, the four States with the fastest population growth rates between 2000 and 2010 were Nevada (35.1%), Arizona (24.6%), Utah (23.8%), and Idaho (21.1%) (Census, 2010). Idaho is unique among these states because it currently has no large cities with a population over 1 million. However, current growth projections indicate that the population of Idaho will nearly double from 1.5 to 2.5 million people by 2050 (Census 2010). Understanding the spatial configuration of urban land use relative to other types of land uses, particularly as a set of rate-dependent, spatial interactions will be critical for determining future trajectories in this region. Understanding how feedbacks between human perceptions, values, and beliefs affect, if not drive, these transitions will also be integral to this research.
Proudly powered by Weebly